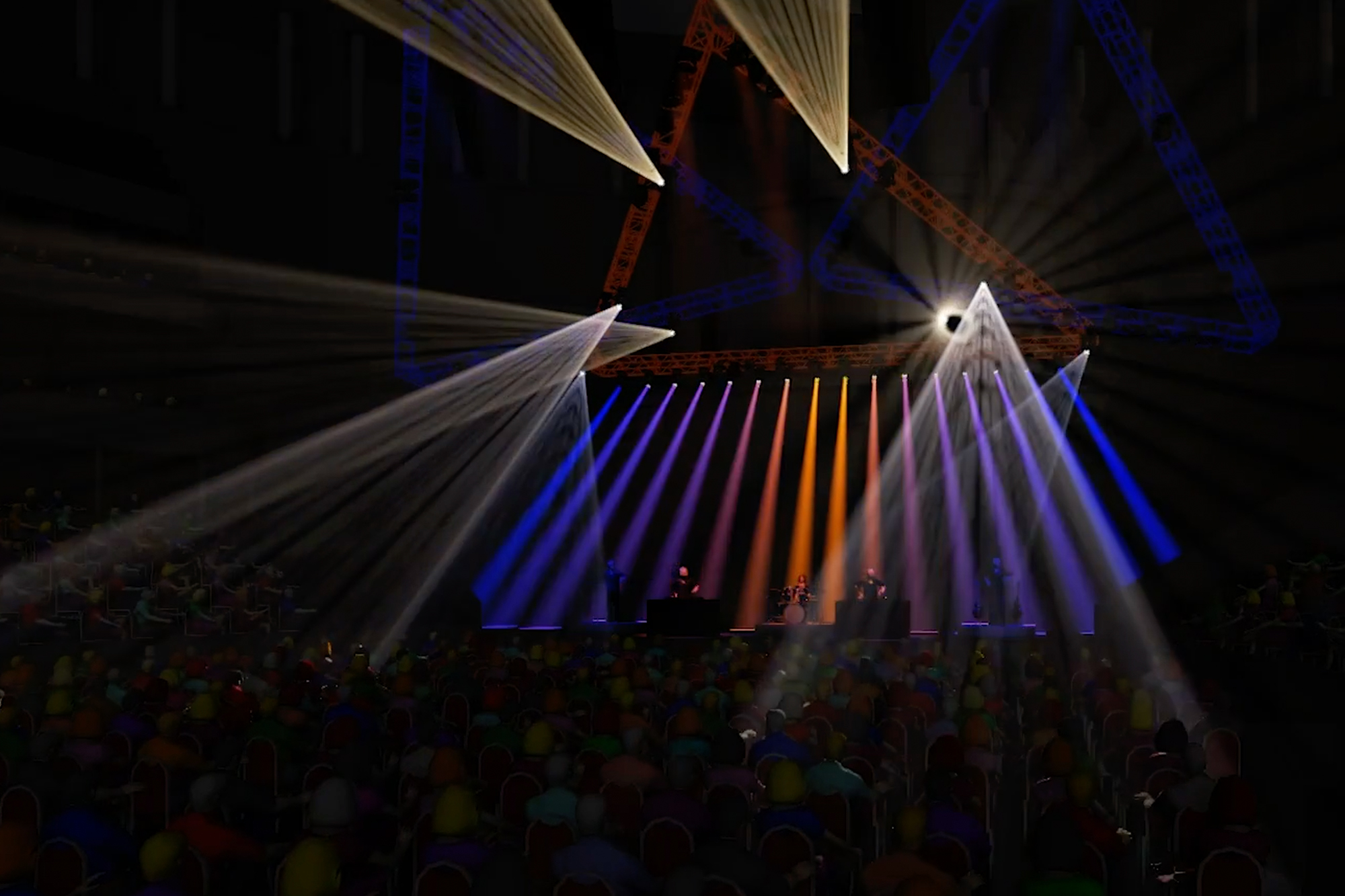 Clay Paky and the CAST Group of Companies (WYSIWYG) created the WACKIT Contest, a lighting competition based on a concept by Lighting Designer Durham Marenghi and his partner Jennie Marenghi.
Two side-by-side competitions were held for lighting designers and programmers separated into a student category and a professional category.

The final judging panel of 4 top LD’s consisted of:

Using WYSIWYG and the 3D WYG File of the Royal Albert Hall model and rig, create your own lighting show. Entrants have the option to use the orchestra and choir provided in the file alongside 4 classical music tracks, or entrants had the ability to choose their own contemporary track and build their own band setup.
The rig supplied in the file had been designed by Durham for the Classical Spectacular which was a bi-annual series of classical concerts produced by Raymond Gubbay Limited. Durham has lit the show for the past thirty years!
Entrants were not able to add to the lighting rig provided in the file.

When I found out about the contest there was no doubt in my mind whether I was going to enter or not. As a lighting designer/programmer, it’s not very often that a competition like this is created for one of our biggest passions, and even when there is something, it’s usually created for students to help them create a name for themselves and learn something new.

Like many if not most people in our industry, 2020 had been not just a quiet year, but it was also a huge shock to the mental health of many of us who are used to being out on the road touring with our friends and creating fantastic shows with immense atmospheres from the artists, creatives and audience alike.

By the time the competition came round at the end of 2020, I hadn’t worked on a live event in person in 9 months due to the pandemic, so something like this was a brilliant opportunity to engage my brain and flex my lighting muscles.

For me as much as I enjoy classical music, I felt for a competition I would be best staying in my comfort zone by programming something that’s electric with a good beat, and lots of flares noises built-in. Not only that, but it would have to be a track I can enjoy and really get into to help the creative juices flow.

After spending hours listening to lots of royalty-free music I ended up choosing to use La Revancha by DJ Greña.
The intro is soft, but interesting and doesn’t drag out as it quickly flows nicely into what would be a verse. Something I knew I could play with as it repeats consistently through the track. The verses themselves have some interesting flares and builds into the pre-chorus which also has an excentric build into the chorus with an added drop point.
The chorus again incorporates many flares and musical additions. The bridge after the second chorus was very simple, I liked this as it was very different from the rest of the track but not boring as it was split into two with a prolonged build back into the third and final chorus which again was different from the previous choruses in the track as it was now in a differen key. Something I know I could use to great effect with a subtle change in the programming. Lastly, the outro, again like the bridge it was relatively simple in form but keeping the beat for part of it allowing me an option to play in a less aggressive form.

Something else that helped me choose this track was that it didn’t have to be too heavy in terms of performers on the stage, and with different elements being used through the track (synths, drums, keys and guitar) I would be able to play with key light and not just have something static lighting my band thought the whole performance.

Before started programming, I wanted to make a couple of decisions on how I was going to set about the whole performance. Firstly, I know I wanted to some way tie the whole track together with something consistent that stuck for all choruses and verses of the track. Secondly, that I wanted to show and hide various members of my virtual band at appropriate times to match the song and the instrument they were playing.

I chose to use the chord changes and colour as my way of keeping things consistent through the full track. I picked 4 colours (red, pink orange & blue) as my base for each chord and kept this consistently rotating on chord changes for the full song. This way the stage never looked too busy with many colours at any one time and created a theme to run throughout the track.

Knowing that I wanted to light up the room with some movement for the chorus and accent on the flares of the track I decided that for the verse I would keep light mostly on the stage only accenting into the audience for the flare and the build into the drop. To keep this interesting however I chose to run a beat-matched effect at the back of the stage. This simpleness would allow the chorus to pop.

On the chorus, I wanted to give this more energy with constant movement, I achieved this by bringing lights into the audience with a pleasing symmetrical circle effect underlined with a simple dimmer effect allowing me to make the audience feel like part of the show. As the track’s chorus is full of flares and hits, I chose to separate these all out based on sound and length and create lighting hits and bumps to match accordingly. For the post-chorus, I chose to add a bit more definition to the beat by adding a flash in the audience lights to match the additional snare hits.

The middle 8 had to be extremely simple, but at the same time, give a different feel with the music having changed from a high-energy chorus into something much more relaxed. I also wanted to highlight the ‘DJs’ on their own and let the other band members fade out completely and using be beams to make them fall completely into the background. As the middle 8 builds to prepare for the last chorus I wanted to play with silhouettes, so with the same lights used to hide the band, I was able to play with zoom and dimmer effects before a quick flash of full band silhouette before the drop into the final chorus.

And here we are, already approaching the end of the track. What I found special about this track was the change in key for the last chorus, this was one of the many things that attracted me to the song in the first place. I of course wanted to do something different, change things in a not too major way to give this a slightly different feel. As I had previously kept the audience spots as well as the beam hits and bumps in a lighter colour matching the stage or even white, I decided that for this final chorus to make everything match (where colour mixing/colour wheels allowed). This certainly changed the look and feel.

Lastly the outro, something that didn’t need too much I think. Halting the movement of the spots in the audience and using a slow rotating breakup gobo instead of the previous eclipse gobo allowed me to do this without the same audience members being constantly pelted with the same blinding flash from the stage on every beat. Fading out to a solo light on the keyboard/synth with the rest of the stage staying in colour (of course, still fading colours with the chord changes). And to finish up, a standard fade to dark blue.

On the 3rd February 2021, Wackit released on Facebook the videos of all finalists to be viewed by the public. Pleased to see my entry had been accepted and was there for everyone to view I got sharing. It felt good being able to share something I created in 2020. Something which took me back to the days before a pandemic that changed our industry in a way nobody could have ever expected.

It was then announced on 1st March 2021 that I was one of the winners of the competition.

I managed to bag a second prize win in the professional side of the competition which for something I had a lot of fun doing and something with which I learned some new video editing skills on was an absolute pleasure.

Strong relationship to the music and very detailed, beautifully cued – repeated motifs were good – would have been fun for the audience- good use of rig, big audience looks – good programming and dynamics – nice to see the performers lit – nice accents and some great cues.

I would like to say an amazing congratulations to all of the other winners of the Wackit Contest as well as to all the other finalists.

All deserving and brilliant videos to watch. It’s amazing to see how different people interpret things differently and create can create their own unique renditions and ideas from a brief having being given the same lighting rig to play with.

Lastly of course a huge big thank you to the contest organizers, Clay Paky, Cast Software, the judging panel, and to everybody that took time to like, share or comment on my winning entry.

I’m looking forward to continuing to use WYSIWYG over the following months as well as an eventual trip to Bergamo to visit Clay Paky when the world starts to return to somewhat of a new normal.

Want to see more of my lighting work? Click Here